German-native Samira Mahboub and American-born Ania Catherine make up SAMANIA, an artist duo grounded in political and social critique around the subjects of gender, coloniality and sexuality.Their work combines movement, performance, photography, film, theory and fashion and has been praised by the likes of Vogue and the Huffington Post. We got the chance to hear more about their story and experiences with their distinctive and unique project.

What inspired you to form SAMANIA? Is there a particular artist, writer, collective, etc. that sparked the idea?

We knew we wanted to create together and that our main interest was interrogating the space between us; so, SAMANIA is a visual exploration and ongoing practice of examining where one of us ends and the other begins (creatively, culturally, religiously). There are, of course, artists we both love, but the idea came from a need that grew between us without having a specific model or person we would emulate.

How and when did you meet? What is the backstory of how this came about?

We met while pursuing master’s degrees at the London School of Economics (Gender Institute). When we met, we were struck by how much we had in common, despite our completely different backgrounds. We both had creative backgrounds and, on the third time we hung out, started writing the concept for our first video art piece, cloth, which was rooted in our studies but made in a way that non-academics could understand/grasp the message. We wanted to start an inter and intracultural dialogue about the divides created between women under patriarchy and coloniality. We filmed cloth in one of our university buildings in central London with no budget, and the piece ended up being featured in the Huffington Post and watched/shared around the world. We knew at that moment we were onto something even more necessary than we originally thought.

Where are you both based today?

Ania is based in LA and Samira in Berlin.

What does Berlin and Los Angeles have to offer to artists like you? In your opinion, how do the cities complement each other?

Berlin and Los Angeles both have a vast feeling of possibility for us. Berlin in the sense that there are always artists pushing boundaries and not afraid to call BS when necessary, which is a healthy challenge. LA because, even though the art scene here is becoming more recognized (especially with art fairs like Frieze coming to LA) and the increasing number of museums and galleries opening, it still has a very wild west energy compared to NY, for example. There is also an immense thirst in both cities for creative work, that is not just trendy or checking all the boxes but original and forward thinking. In those ways, the two cities inspire and demand work that really is saying something, questioning something, doing something.

Having been in each other’s cities, what did you notice about the city that you also saw reflected within the person (aka Ania or Samira)?

Ania: Samira is real. Berlin has a sense of raw, realness, that I often feel is missing in LA. Samira definitely embodies that, and it’s something I have appreciated about her since the beginning. She doesn’t run or shy from confrontation; she is direct in her communication and calls things out immediately, which reminds me of Berlin.

Samira: LA is very versatile in its way of being. So is Ania. I have never met a person with so many different talents and so much dedication. The more closely you look, the more layers there are to unpack. And, as LA‘s surroundings are full of beauty and ancient souls, so is Ania as an artist.

Hex is influenced by the Mary Wigman 1926 performance. Using that, how did you blend both your personal German and American influences and backgrounds with this piece?

Mary Wigman worked both in Germany and in the U.S. and both countries influenced her practice. In making Hex, we didn’t think specifically about how our personal German and American backgrounds influenced the work. Our mission was to stay as close as possible to Mary Wigman’s intention and purpose, knowing that staying true to her would lead to the most authentic interpretation of the original.

Why do you think this piece is relevant to both the United States and Germany today?‍

Hex is a contemporary film adaptation of German expressionist choreographer Mary Wigman’s 1926 performance ‘Hexentanz,’ or witch dance. We found a video of her original performance, and it hit us viscerally. In a time when women (especially in dance) were expected to be docile, fragile, beautiful, weightless, here was this woman who was embodying the complete opposite. Wigman was one of the first choreographers who didn’t shy away from ugly or dark movement, and we loved that. Her movement is visually and actually loud, intense, and, most importantly, an act of reclaiming and owning space. We were moved by her doing this in the 1920s and even more moved, when we realized how little had changed since her time.

Any advice for those who are trying to move from Berlin to LA or from LA to Berlin? Challenges? Advantages? Pros? Cons?

Changes are always challenging. New city, new rhythm, new logic, new pace. Both cities definitely have their advantages and their rough edges. Both cities are cities of the arts; they have exciting art scenes but are very much different, when it comes to one’s daily reality.
While Berlin is definitely more affordable (despite the increasing gentrification in Berlin) and does have a very well-functioning public transport system (Europe!), LA offers beautiful nature and is very health-focused, which can definitely add to one’s quality of life. Both cities can be quite rough, so it is important to have a support system and build a circle of trust. Nevertheless, both cities truly are buzzing and rewarding to live in.

What has been most rewarding project for Samania?

That is a very difficult question to answer, like asking someone to pick a favorite child haha. Every project we’ve done stands for and represents a specific subject, angle and context. From tackling Islamophobia, to women's rights over their own bodies, to queer discrimination, to coloniality, each piece speaks to something that we find crucial to addressing for society to move forward. We love them all and they are all rewarding in unique ways.

What’s next for Samania? Any new projects that you can tell us about? If you have one, what is your goal or purpose with Samania?

We are currently working on a short documentary about Hex that contextualizes the piece historically, follows the process of making the film from first brainstorm, to rehearsals, through the filming process and includes interviews with us and the producer/editor Dejha Ti. It really allows us to dive deep into all the political weight, symbolism and narrative layers in the film. As we live on different continents and both are actively pursuing our own career paths, carving out time in our schedules to create new work is always a mission; but, we have some exciting plans in the works for early 2019, which we will be announcing soon.
In terms of a general goal or purpose, SAMANIA does not want to reach just to those with enough privilege to read an article we could both write in an academic journal; we want to take advantage of mainstream channels of communication to shed light on perspectives that are often left out of them. Power relations within society are often made invisible, so being able to visualize the invisible via creative work not only helps us share new perspectives with others, but it is also a form of hope. It helps us understand these subjects and ourselves better. We can say that in our own ways; we have dedicated our academic and creative careers to bridge-building and to tackling difficult subjects and conversations via visual art. We feel an immense drive and responsibility to tie our creative work directly to our political positions and current events, as well as treat our art and image-making as activism.

Watch an excerpt of their work here: 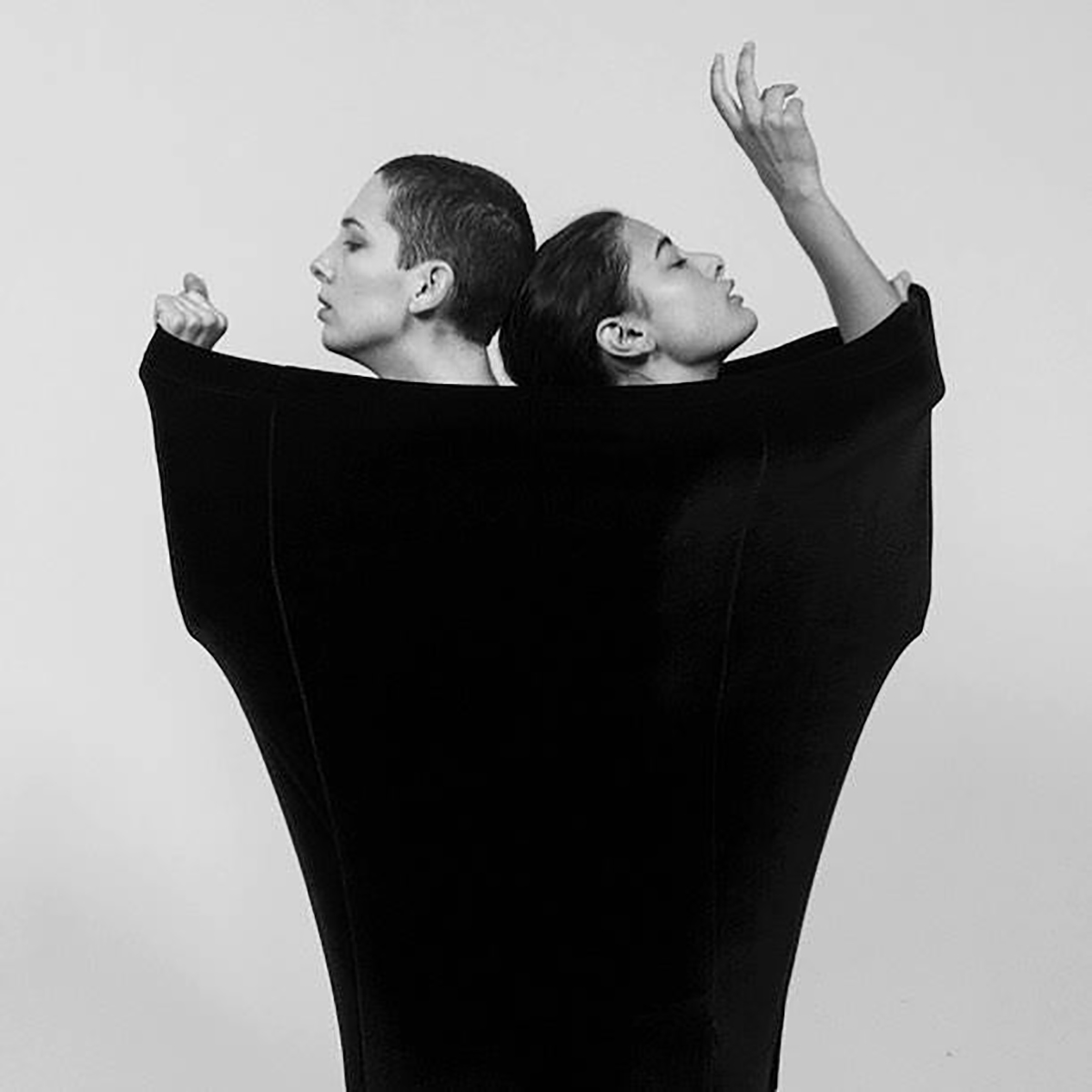 SAMANIA is an artist/scholar duo composed of Samira Mahboub and Ania Catherine. Samira (Germany) and Ania (USA) met in 2013 while pursuing master’s degrees at the London School of Economics Gender Institute. Their work combines movement, performance, photography, film, theory, and fashion, and is grounded in political and social critique around the subjects of gender, coloniality, and sexuality.