I noticed very quickly when I looked around Berlin that there was high output, a wealth of creativity, a rich cultural world which was full of activity.

Kimberly Marteau Emerson has achieved too much in life to be known simply as the wife of John Emerson, the recently-retired, Obama-appointed U.S. Ambassador to Germany. She has had many lives before her time in Berlin. Emerson currently serves on the international board of global NGO Human Rights Watch and previously worked as a lawyer, an executive in Hollywood, and Director of Public Liaison at the U.S Information Agency (USIA) during the Clinton Administration. In 2017, upon her return to Los Angeles from Germany, Emerson unofficially and most earnestly became an  "ambassador" for Berlin, a city where she left a piece of her heart. Her love for Berlin is infectious and was born out of her insatiable curiosity about Berlin's history, her appreciation of Berlin's diverse culture and population, and her deep engagement with Berlin's creative, human rights, tech, entrepreneurial, and foreign policy communities. Emerson loves both Berlin and Los Angeles and plans to keep a foot in both cities. As Obama appointees, the Emersons were required to depart Berlin on the day of Donald Trump's Inauguration, and have returned to their home in Los Angeles, where Ms. Emerson was born. There, Emerson sets up her newly renovated home while contemplating the past years, and the years to come. When I arrive at her house, Emerson opens the door in skinny jeans and a casual Berlin Mitte sweater.  In our interview, she covers a wide number of topics -- from tennis to the Teufelsberg in Kreuzberg, to the rise of populism and the urgency of protecting democracy, to Savignyplatz - the chic neighborhood in Berlin's former West where the Emersons now own an apartment. Emerson is the person with whom you want to speak when it comes to understanding the feeling of "Berlin" from the perspective of an Angeleno.  She has nothing but good things to say. For her, Berlin’s greatest emotions and challenges stem from its memories and history, which are felt in the streets and backyards of this capital urban center.

The very first moment in Berlin, how was it?

It was 2011. I was there for the first time. I found everything easy and beautiful. I know this may sound strange given the city's dark history, but I found a city with many different and stunning aspects to it.  I loved it immediately.  And once we moved there in 2013, I felt it was my job and pleasure to share that love with all of our American visitors.

And then? Did the love hold? You were there for almost four years.

I noticed very quickly when I looked around Berlin that there was high output, a wealth of creativity, a rich cultural world which was full of activity.  Art, ballet, opera, architecture, this bubbling contemporary story. There is hardly a place in the world where old and new meet so productively.

How would it sound if you had to talk about Berlin in an elevator pitch?

Anything goes in Berlin. "Freedom" is its byword. Berlin is a city of moments. There is always a plaza or square that takes one's breath away. There is always a surprising moment, a surprising celebration. Berlin has many "rough edges," something I personally like very much, more so than the perfectly manicured buildings and streets of some other cities.

Why exactly do you prefer "rough edges"?

The edges, these "edges", they represent memory. The un-renovated buildings in Berlin may look spooky, but they tell the story of the past. The city has "worked" it in a certain way; it embraces these edges, so that the memory of Berlin during the Nazis and the GDR, as well as the Prussians, does not disappear. That's one side.  The other is the affordable  freedom of Berlin, which draws artists, youth and culturati, much as New York did in the 1970's when there were fewer financial types, venture capitalists and hedge fund managers and the cost of living was lower.

Good, but a few hedge fund managers and venture capitalists could not hurt in Berlin. For the mixture.

They are already there. Berlin sits at the crux of this transformation, which it does not resist. And this transformation is fascinating. There is, for example, a business management school -the ESMT - which is located in Honnecker's old Büroräume.  Look at the irony in that: The former socialist headquarters now houses a school to train capitalists.  Or consider the WWII bunker of Christian and Karen Boros, where one can wander through thick-walled, cement rooms filled with pieces created by some of the world's most cutting-edge artists. Or the memorial of the Nazi book burning on the Bebelplatz. A simple glass square sits in the cement sidewalk of the plaza.  Visitors have no idea it is there unless directed to it.  When they finally stand directly over it and look down into the glass, they see empty white bookcases. It stops you cold.  I find this kind of memory genius. And subtle. It tells of a Berlin which we hardly or imprecisely know. For this kind of transformation, I feel a great passion. 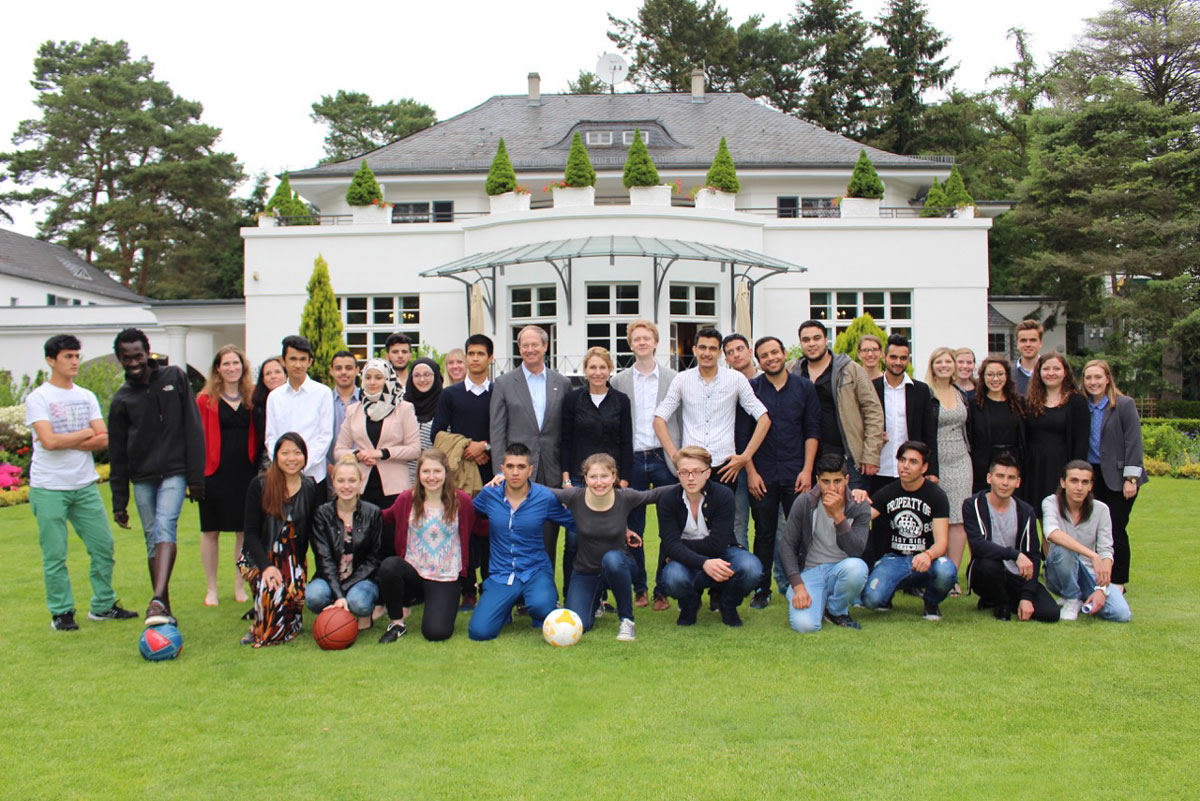 Afternoon barbecue, songs and soccer at the US Ambassador’s Residence with Syrian, Afghani, Pakistani and Eritrean refugees | Summer 2016. 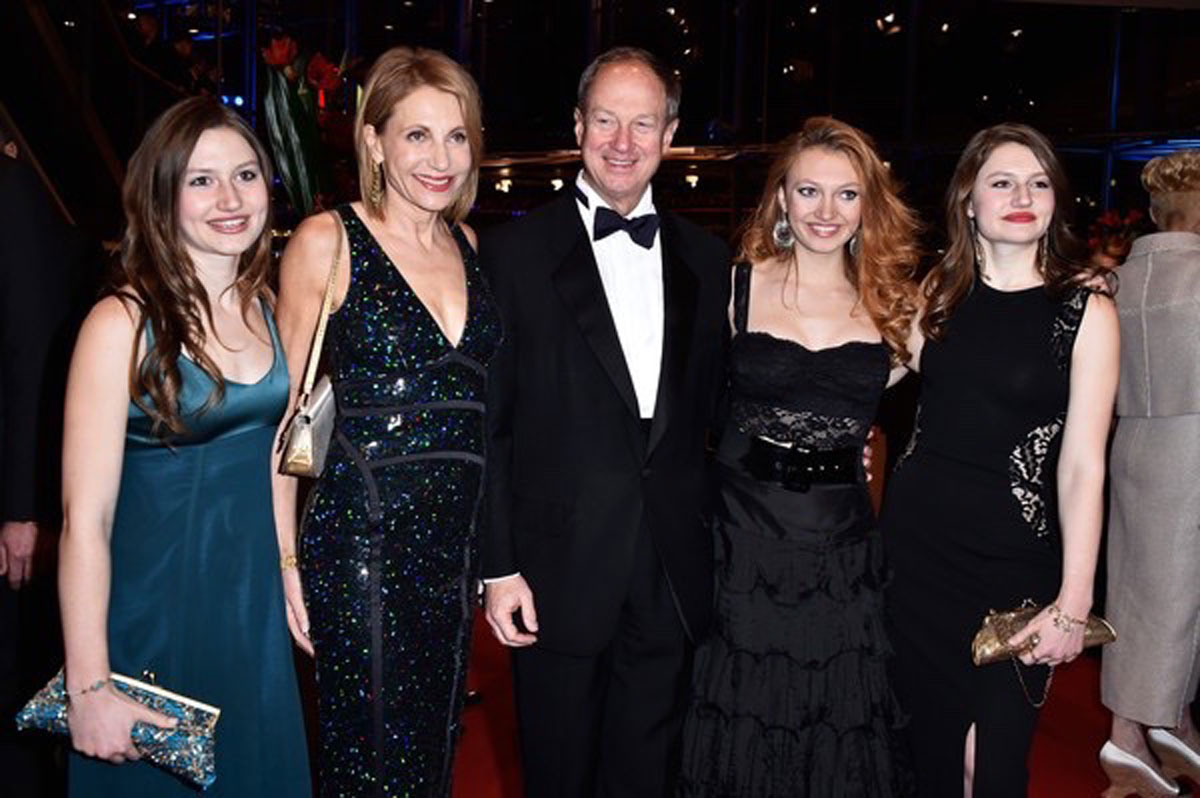 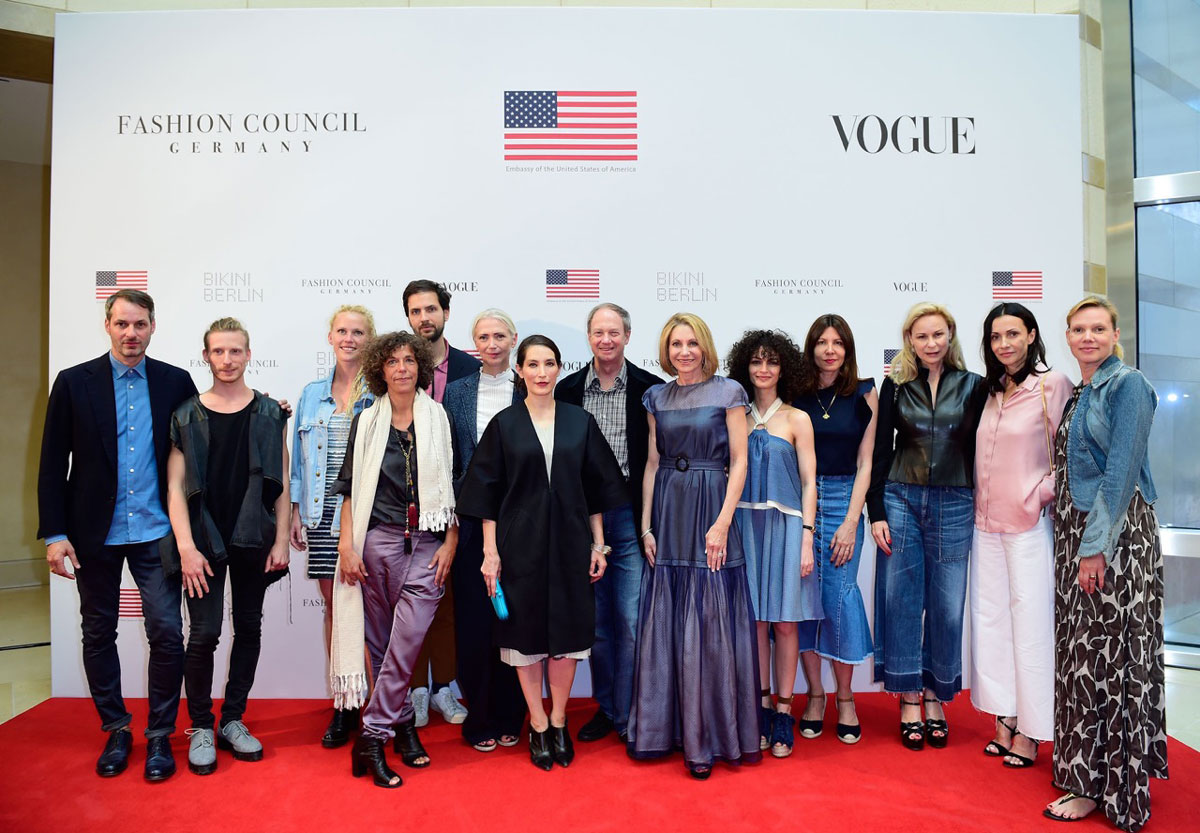 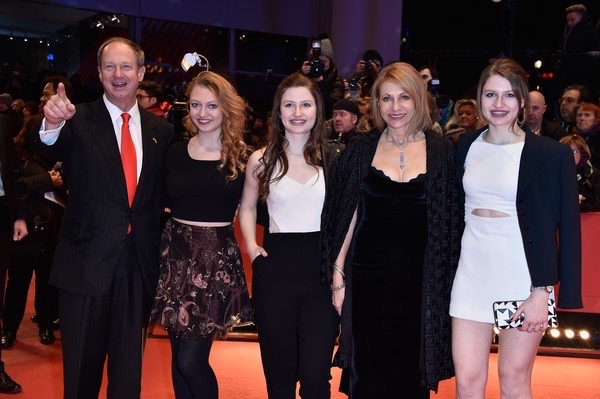 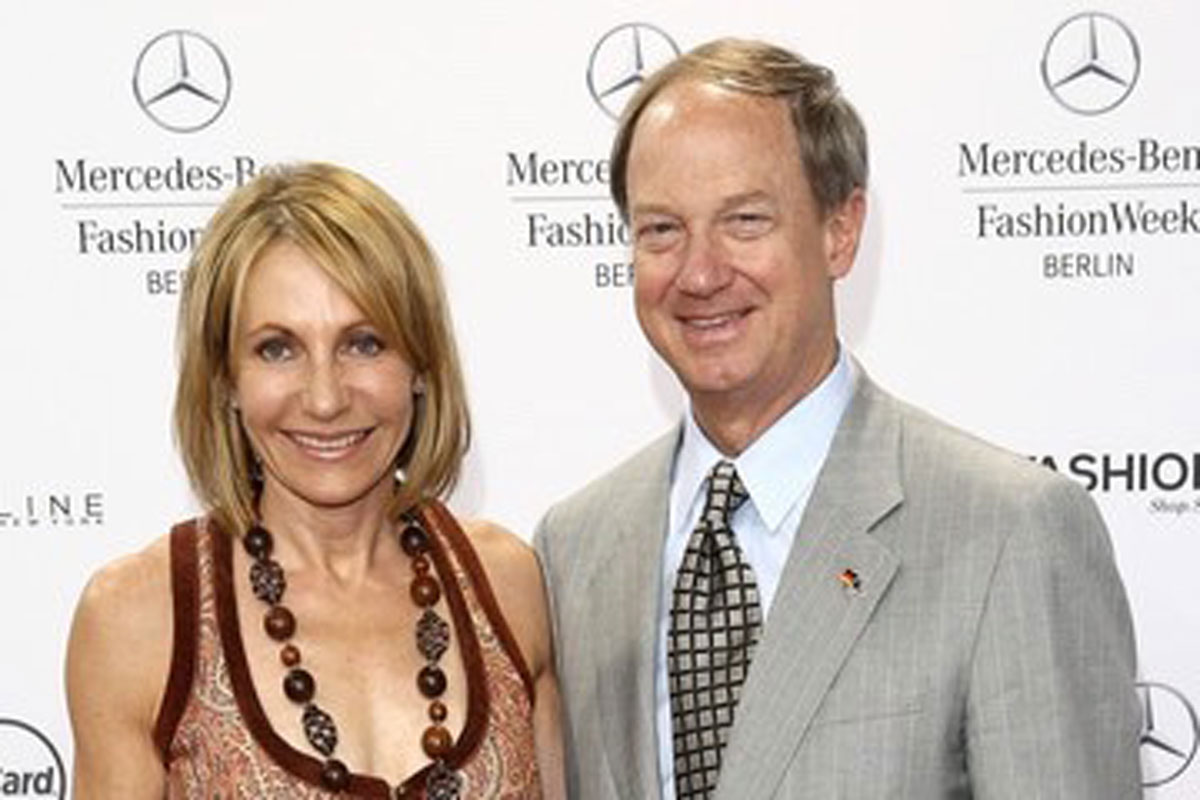 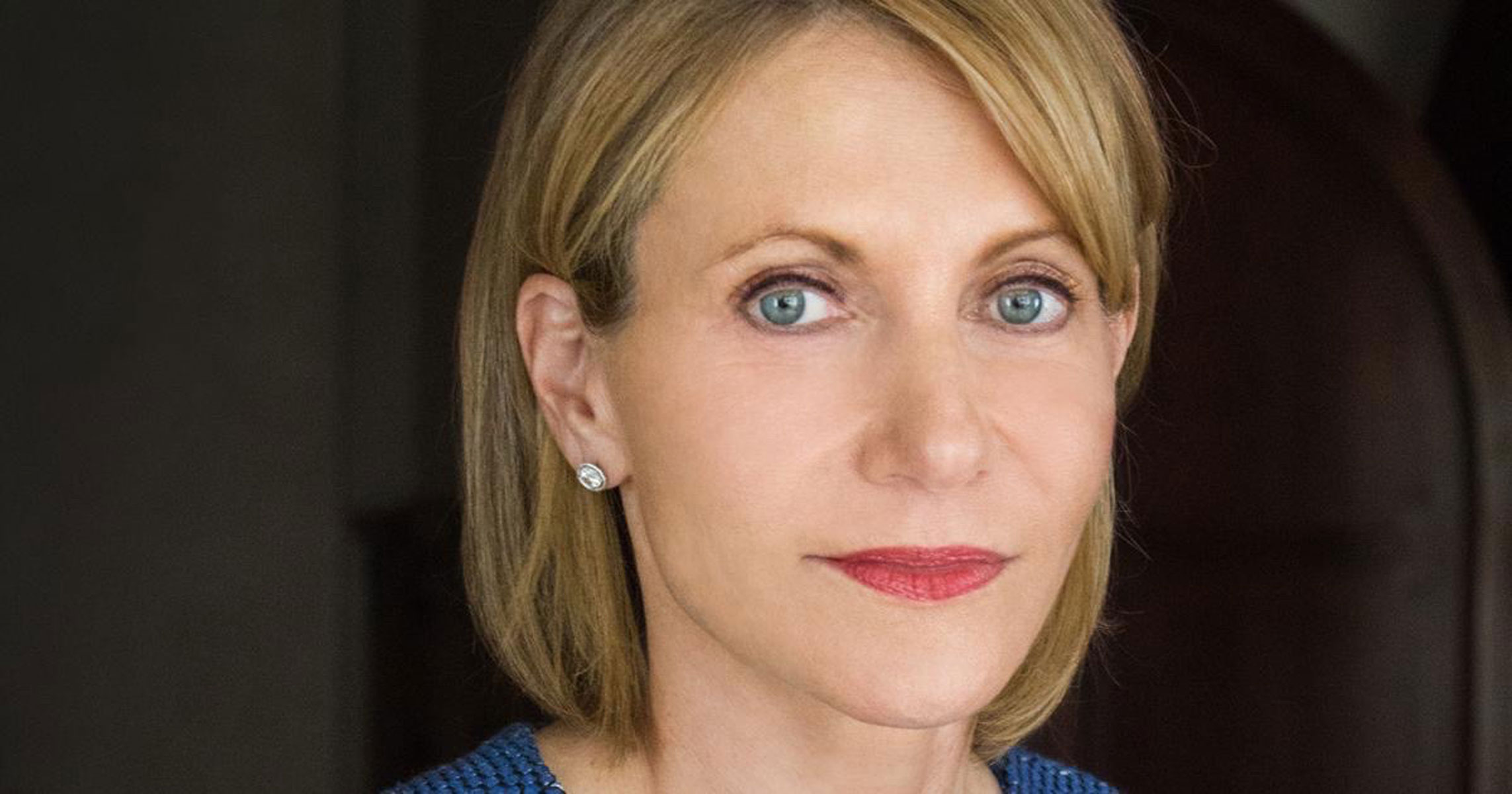 Kimberly Emerson is an attorney and civic leader. She hosts several events per week to maintain the friendship and mutual support between Germany and the United States. Formerly, she worked in the Clinton Administration as the Director of Public Liaison for the U.S. Information Agency (USIA). Currently, she serves on the International Board of Human Rights Watch and continues to be active with HRW in Berlin. Emerson lives in Los Angeles with her husband, John B. Emerson, former U.S. ambassador to the Federal Republic of Germany and their three children.